During the 2020-21 winter season, due to Covid-19, the Ivy League shut down their season.   This left many Ivy League players looking for ice.  This created an opportunity for a number of players from Harvard, Dartmouth and Brown universities to come to Florida for 2-3 months and train with Brett

“The setup down in Tampa is elite for many reasons, but most prominently because it is home to a coach who truly cares and is truly committed to do everything he can to help his players unlock their full potential. Brett’s unique, holistic training approach touches on the everything from the basics, to what the Greats in our game do, and did, in many aspects of the game including physically, mentally, sensorily, and more. His well-thought out, science-based system can benefit players at all ages and levels in taking their game to the next level.  Thank you for everything Strotter.”

A group of Division 1 players and I went down to Florida to hone our skill during the Covid-19 season. Brett presented a unique mindset towards approaching the game that a lot of us hadn’t seen. His game plan towards developing our hands, speed, and mind resulted in huge gains for each player. Brett’s ability to channel his thoughts and insight towards improving allowed a group of players to open their minds to a different way to see the game. I still use many of the tools and skills that Brett presented months after leaving Tampa, and he’s been a hugely positive impact on me as a player.

The off-ice training was so unique and something nobody ever does in regards to teaching sprint mechanics and how they relate to skating.  Also, combining your anaerobic capacity and aerobic capacity through the sprint interval training has done great things for me in the time I’ve been doing it. Lastly, I think all of the on-ice sensory work (perceptual Cognitive Skills) we did was stuff most people don’t teach. By the end of the few months we were looking like the Russian five out there!

My skating felt unreal and much improved when I returned to games - looking forward to continuing to develop it this summer.

Working with Coach Strot has given me the technique to perform and be creative at the college level. His preciseness, passion, and knowledge make working with him challenging and rewarding.  Coach Strot’s speed and sensory training are effective and I incorporate his methods every time I’m on the ice. His ability to break down these two aspects of the game and rebuild them to be more efficient is what makes his teaching unique. He has transformed the way I train, move, and think on & off the ice. I trust Coach Strot because I know the difference in my game and my training since working with him.

Brett’s passion for the game is second-to-none which creates a high end attention to detail in his program.  Bretts speed of hands, speed of feet speed of mind training concepts targets the areas where the modern game is going as he creates an emphasis on getting players faster and has all the tools to do just that. Overall, Brett is an all-around great guy who is able to communicate with players on their own strengths and weaknesses and tailor the training to improve these aspects.  Learned a lot as I loved my time down in FLA.

Training in Tampa with coach Strot’s Speed of Hands-Feet-Mind Program has helped me so much as I feel a huge difference in my game which is paying dividends now.

ROOPE HINTZ: Florida to the NHL 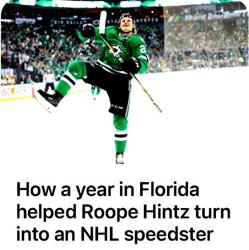 That’s​ the old cliche and​ mantra we​ often​ use​ about​ professional​ athletes,​​ no matter the sport. An athlete’s ability to get separation from an opponent or change gears is often chalked up to natural ability they must have been born with.

But that’s only partially true.

Natural speed exists, sure, but those who have potential to fly around the ice can be taught to be faster. It’s a lesson that helped define Stars forward Roope Hintz, who without a backstory looks like someone you would expect to fit that “you can’t teach speed” idiom.

“No, I wasn’t always the fastest,” Hintz said. “Maybe by the time I was 17, but I wasn’t like faster than everyone. It was training and teaching, everything, that’s how (I got fast).”

During these NHL playoffs, Hintz’ speed has stood out. With more eyeballs tuned into Stars games on the national stage, the 22-year-old Finn has grabbed attention with his dashes and adventures through the neutral zone. His ability to cycle the puck and hit another gear to get away from an opponent, along with his flowing head of hair, create what could be a signature look for Hintz if his, ahem, star grows.

Throughout this season Stars coach Jim Montgomery has spoken about how Hintz’ speed first turned him into an NHL player and then set the table for him to evolve into a true top-six forward, one that internally solved the Stars’ second-line center questions after this year’s trade deadline.

The foundation of that speed was forged in an unexpected location when Hintz was a teenager.

“I was playing in Florida, there was a skating coach and since I wasn’t in school all day I spent more time with them,” Hintz said. “They were teaching me better techniques and stuff. That changed things a lot, I had a skating coach (for the first time), I got better.”

Hintz spent most of his youth career playing for Ilves back in Finland, but in 2012, when he was 15, he spent a season playing for Tampa Bay Juniors in the Empire Junior Hockey League. It was a connection set up by Tomi Haula, the father of Vegas Golden Knights forward Erik Haula, who was acting as a family advisor for Hintz on his hockey career.

“I wanted to go outside Finland, I think that was important,” Hintz said. “You learn some English too, it was a good experience.”

Brett Strot coached Hintz that season and is the owner of the Tampa Bay Juniors program.

“I remember him coming over, he was only 15 and he was just learning the language,” Strot said on Thursday. “But right away you could see he had a great personality and he was really passionate about hockey. He was a good player, he was fun to work with, everyone really got along with him. I actually ran into some of his ex-teammates recently and we were talking about him.”

Hintz left for Tampa somewhat unrefined. After a year in Florida he completely transformed how he attacked with speed and pace.

“Roope always had good hockey sense and good skills, and was unselfish and used his teammates well,” Strot said. “But speed was probably the thing that he was lacking a little bit in becoming an elite high-level player.”

Hintz did specific speed and acceleration training during his time in Tampa. Sprint workouts became part of his routine off the ice and he worked with Tampa’s skating coach, Natalia Zagorodnikova, to make sure he was maximizing each stride and getting the most out of his game.

It was like a golfer re-working their swing; a simple tweak here and there makes everything else go so much smoother.

“It was great timing for him to be here. He was 15 at the time, about to turn 16 later that year. And that’s your speed window, 13 to 16,” Strot said. “You can get faster beyond that, but that’s a critical time for players to develop.”

In 20 games with Tampa Bay, Hintz was dominant. He had 35 points (20 goals, 15 assists) in 20 games and was briefly called up to the Bismarck Bobcats of the NAHL. The experience gave Hintz a taste of how important his potential speed could be in the North American game on the smaller ice surface.

There is naturally less time and space on an NHL-sized rink. Bodies are confined within tighter quarters and getting to that space when it’s available becomes paramount.

“It’s more physical and faster, you have to win battles to space,” Hintz said. “It’s good, I liked it.”

Hintz only spent one year in Florida, but took the lessons from Zagorodnikova to heart. When he returned to Finland he started working with an individual skating coach there as well, and he started to pop up on the radar of NHL scouts during the 2013-14 season.

A year later Dallas drafted him in the second round, 49th overall, in the 2015 NHL draft. If you ask Stars personnel, Hintz really started to take off after the 2016 World Junior Championships. Finland won gold and Hintz flew under the radar with names like Jesse Puljujärvi, Sebastian Aho, and Patrick Laine stuffing the scoresheet for the Finns.

“He was very good during that tournament, he didn’t get as much attention because of things that Laine was doing, but that was really telling for us he was close,” Stars general manager Jim Nill said. “We had him do one more year in Finland after that, but he was really on the right track from there.”

Playoff performances only solidified that thought. With HIFK during the 2017 Finnish playoffs, Hintz had 14 points in 14 games. The next season he was one of the Texas Stars’ best players with 12 points in 22 contests as the Dallas AHL affiliate reached Game 7 of the Calder Cup Finals.

Now Hintz is making waves in the NHL playoffs. He had an assist in the Stars Game 1 loss to the St. Louis Blues on Thursday, and if Dallas is going to advance to the Western Conference finals Hintz is likely going to play a large role.

“It’s exciting to see Roope having an impact, they talk about him all the time watching the NHL network, they are always bringing up his name,” Strot said. “You could see at a young age he was always talented, he had good vision for the game, and had good skill. But getting to the NHL is not easy. He really had to work at his game and it’s good to see that a lot of that speed stuff has paid off. When you’re passionate about something and trying to get to those high levels, you have to work, and he worked.”

Why Train with Hockey International 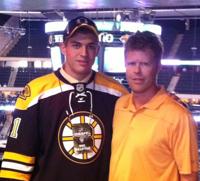 If you are a youth hockey player, you don’t have to leave Florida until you are ready – and able to compete – in an upper-level hockey program.   So many players think that ‘exposure’ is the only way to make it.   Well, we know that in reality, until you have the package of physical skills, mental skills and the speed necessary to play in those upper levels, exposure doesn't mean much.   Just think of all the players who live up north - that don’t make it – they have all the exposure in the world.   That’s why our motto is:

Don’t Just Play – Be a Player!

We have identified the key attributes you need to become a player – and you can stay in Florida to develop those skills.  We have Pro-NCAA and Olympic players coming to Florida to train with Hockey International, there is a reason…..we do a few things nobody else does.

These former NCAA players and members of the U.S. Women’s National / Olympic Team provides some insight on how unique our training is and what it means to them, and what it will mean to youth players.